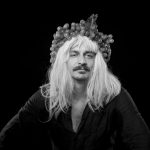 The presence of a contradiction between control and risk taking is apparent in most of Nedic’s works. A teenage witness to the horrors of the Bosnian War during the early 90s, Nedic knows what it is to experience a local hell and to escape into imagined havens.

Zelko Nedic is self taught artist, born in former Yugoslavia. He showed interest in visual arts in the primary school where he attempted his first art courses. At the age of 18 he moved to Belgrade (Serbia) as refugee where he completed his education. Soon after he started to working in highly established hair studio, where for the first time he had opportunity to work with a professional photographers on a fashion photo stories and music videos as hairdresser and photographer’s assistant.

​His passion for art specially photography grow into obsession since the lost of all images from his childhood during the Bosnian war in 1992.

​The presence of a contradiction between control and risk taking is apparent in most of Nedic’s works. A teenage witness to the horrors of the Bosnian War during the early 90s, Nedic knows what it is to experience a local hell and to escape into imagined havens. Through his collodion images and his earlier works, many reminiscent in texture (but not as extreme in content) of Joel Peter Witkin’s macabre tableaux, Nedic takes us to the edge and out into a world of restrictive possibilities. Zelko provides his audience landscapes buoyant with symbolism and references to social norms obscured by absurdity.

In his latest works he explores how new technology can be used to more actively engage the viewer. We’re amid a digital revolution and so his aim is to investigate how various technologies can be incorporated with his work to enhance or alter the viewer experience. In 2021 Zelko started to present his paintings and photography artworks created by 19th century photography process in innovative and captivating ways and to even entirely change the way one experiences the artwork by turning his paintings and photography into digital art NFT ( Non-Fungible Token ). An NFT is that ownership proof for an artwork that was created and exists digitally.

​​In 2000 he moved to Australia where he currently lives.

Art for Sale by Zelko Nedic