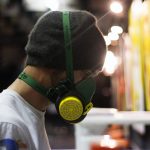 Much like a musical sample or patchwork fabric, I reuse and recycle previous works and canvas, cutting them up and casting them amongst new landscapes. I refer to these as “contemporary leftovers”, a collection of disjointed stories, themes and ideas sewn together across time and space.

With numerous solo and group exhibitions, as well as being selected as a finalist in many high-profile awards, Rehgan De Mather has quickly established himself as an artist to watch.

De Mather was born in Adelaide, grew up in Gippsland, and currently lives and works in Melbourne.

“De Mather’s paintings replicate the traces of industry, and the cryptograms or graffiti, on walls of contemporary spaces. They flash with comic book exclamations, bleed with paint scrawled behind alleyways, and are seared by an essence of New York grit. His prolific output of work seems to be riding on a distinctly serious but fun attitude. His work is exciting because it is raw and has a genuine interest in the noises and signs that clutter urban spaces.”
David O’Halloran, Senior Curator, Latrobe Regional Gallery