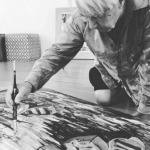 Robin Wilson is a Brisbane based, impressionist artist who has been painting for over 50 years. “I like to think I’m like a good wine and have matured with age.”

Robin Wilson was educated in the UK. His artistic talent surfaced at primary school and he was a relatively experienced oil painter at the age of twelve. At thirteen, he won a scholarship to the unique Moseley School of Art which lead to full time tertiary studies at Birmingham College of Art (City University) and further studies from 1959 to 1961 at Shrewsbury College of Art.

Robin obtained teaching qualifications whilst living and working in London between 1969 and 1972. During this period Robin was selected for two major exhibitions in London: The Young Contemporaries in 1957 and another staged at the RBA Gallery in 1960. Since then he has exhibited on 3 continents.

Robin works with a variety of mediums including oils, acrylics, watercolours and inks. His subjects include figure groups, life and still life studies and land and streetscapes. He employs a general post- impressionist to expressionist style with mood, colour and pattern being stressed more than realism. Robin believes that the main influence on his work springs from exploring the works of Stanley Spencer, Paul Nash, Paul Klee, Piet Mondrian, Gustav Klimt and Paul Cézanne.

Robin lives in the Redlands where he continues to paint while teaching at Yurara Art Society.

Art for Sale by Robin Wilson