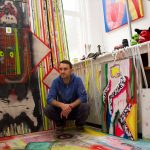 Much like a musical sample or patchwork fabric, I reuse and recycle previous works and canvas, cutting them up and casting them amongst new landscapes. I refer to these as “contemporary leftovers”, a collection of disjointed stories, themes and ideas sewn together across time and space.

Since completing his BVA at Monash University Gippsland in 2001 Rehgan De Mather has held 25 solo exhibitions and been involved in over 30 group exhibitions throughout Australia. He has been selected three times as a finalist in the Brett Whiteley Travelling Art Scholarship, Agendo Art Award, and Arc Yinnar Drawing Prize; twice in the Sunshine Coast Art Prize, Black Swan Prize for Portraiture, City of Whyalla Art Prize, Mount Eyre Art Prize, Prometheus Visual Arts Award, Clayton Utz Art Award, Lethbridge 10,000 Small Scale Art Award, and John Leslie Art Prize, as well as being a finalist in the Araluen Art Prize, Stanthorpe Arts Festival, Cambridge Studio Gallery Portrait Prize, and the 6th P.A.F International Drawing Biennale. He was a semi-finalist in the arts category of the Young Australian of the Year Awards, and a recipient of a Regional Arts Development Grant through Arts Victoria. He was awarded a yearlong residency at Appleton Street Studios in 2011 courtesy of the Sandra Bardas Studio Grant, was selected as the 2013 RAW Melbourne Visual Artist of the Year, and was recently awarded the 2017 residency and exhibition at fortyfive downstairs.