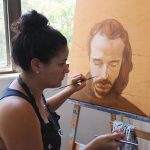 Natasha Zraikat is a figurative artist based on the Gold Coast.

Natasha Zraikat is a figurative artist and based on the Gold Coast. She worked for several years in acrylic, but has recently transitioned to oils. She has studied and worked creatively in both Australia and Italy, and has been involved in several prestigious art awards (see below). During Natasha’s artistic development in Italy, she won Best of Show in the City Wide Art Competition in Florence.

As an artist, Natasha is deeply intrigued by the philosophical and the metaphysical, so while her work is generally realistic, and in some cases, narrative, it is also symbolic. As an environmentalist, she feels a deep emotional connection the landscape around her. In her latest works, she asks the question – Where do we end, and where does our environment begin? Are we in fact one and the same?

Natasha’s paintings convey her intense focus on the emotion and character of her subjects. Partly realistic, partly unreal, they seem to exist in another place – somewhere between the conscious and the subconscious – like a memory held over time.

Art for Sale by Natasha Zraikat