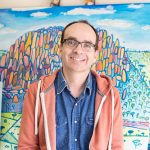 Matthew Broughton is a freelance graphic designer, illustrator, printmaker and painter based in Melbourne, Australia.

Matthew Broughton is a freelance graphic designer, illustrator, printmaker and painter originally from Geelong but now based in Melbourne, Australia.

Aside from his graphic design and illustration work he also focuses on a number of self-initiated side projects such as: fine art, photography and printmaking. Matthew has artwork in private collections in Australia, Europe, The Middle East and North America.

The majority of his artwork is inspired by everyday life – both the natural world and the urban environment.

The illustrative and graphic nature of his work lends itself to the tonal qualities of linocut and wood block printing. Each piece taking many hours of drawing and carving. The blocks are hand printed using a 150 year old Albion Press.

Matthew’s painting style is the polar opposite to his printmaking -colourful, bright and whimsical with an almost childlike naivety.

Art for Sale by Matthew Broughton