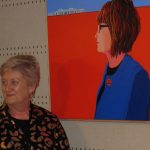 Marian utilises vivid colour, flowing line and hard edge, minimalist abstraction in her representations of seascapes, landscapes and the human form. A keen portraitist, her figures often embody humorous or surreal elements. Marian has been a finalist in a number of national award exhibitions.

After leaving art teaching in the 1980s to pursue her interest in writing and literature, she was awarded a PhD in English and worked as an academic until her retirement in 2007. It was then that she rediscovered her love of painting.  She began exhibiting her work in 2009.

Minimalism, hard edge abstraction, vibrant colour and flowing line are the key elements of Marian’s painting style. Her formative influences include the Post Impressionists; the simplicity and bold design of Japanese woodcuts and the organic, flowing line of Art Nouveau.

The sea is a recurrent motif in her work and memory is a theme in her recent series on migration, recalling her childhood migration by sea. Her seascapes are often unpopulated, highlighting their elemental and spiritual nature.

A four time finalist in the ANL Maritime Art Award, Marian is also a keen portraitist.  She has been a finalist in the Portia Geach Memorial Award; the Southern Buoy Portrait Prize and has featured twice in Hidden Faces: the Victorian Salon des Refuses.  The recipient of a number of awards in the Gippsland region, she has held two solo exhibitions and participated in a number of group exhibitions in Melbourne and Gippsland. She has recently been invited to exhibit in ‘Marvellous Melbourne’ at the Pan Pacific Hotel, South Wharf Melbourne.

Art for Sale by Marian Quigley