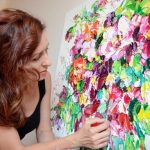 “I come from a very creative family so it was only natural for me to take an interest in art. My art is not placed within the boundaries of a single style or genre.
I love using a combination of thick paint, a palette knife and experimenting with different color tones. I am inspired by nature, whether it be seascape or flowers, to create something that is a little bit different with a modern outlook. I am an explorer by nature and I let my curious personality lead me to new journeys in art.” ~ Liliana Gigovic

Art for Sale by Liliana Gigovic