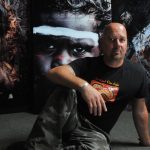 In his artistic universe, Aboriginal artist Wayne Quilliam defers to the influences of his ancestors as he embraces modernity.

Aboriginal Artist Wayne Quilliam infuses his creations with the pure essence of culture.

His award-winning career includes the coveted NAIDOC Artist of the Year, Human Rights Media Award, Walkley Award for photojournalism, nominated as a Master of Photography by National Geographic and highly commended in the Bowness Art Award.

He has created and curated over 300 exhibitions throughout the world and been published in more than 1000 magazines, books and newspapers.

In harmony with his photo journalistic work he is recognised as one of the country’s top artists for his diverse art practices including the ‘Lowanna’ series that infuses textures of earth onto the human form and DJIWARR series exploring connection to country as seen through the latest drone technology.

These shows continue his international successes from the Museum of Young Art, Vienna, several galleries in Berlin/Cologne/Dusseldorf/Hamburg as well as Russia, Guam, Indonesia and numerous galleries in Australia. His ‘Towindri’ exhibition in Cairo, Egypt attracted critical acclaim and has since been acquired after touring Riyadh and Beirut.

Art for Sale by Wayne Quilliam