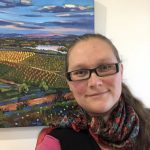 Valentyna follows Contemporary Impressionism, the style that focuses on the effects of changing light and weather, concentrates on feelings of moving air and emotions of the particular landscape scene.

I relocated to Canberra from Sydney in 2016, and really connected with the city.
I’m a professional landscape painter committed to my art and the people who appreciate it. I received my professional training in one of the oldest (founded in 1922) art schools on the territory of former USSR, with clear lineage to the famed Imperial Academy of Arts, one of the organisations that adopted Impressionism from its French creators, developed it and brought it into the 20th Century.
I also hold Masters degree in Architecture and Landscape Design.
Yet I’m an Australian artist, who re-discovered the techniques and knowledge I’ve learned in a very different place, in the context of the nature, history and social fabric of Australia.
Recent Solo-Exhibition at the Village Centre, National Arboretum Canberra, was a great success. More than 20 paintings are sold from the project “Seasons of the Arboretum”. My style really suits the landscapes of the National Arboretum. Every painting studies presented in the exhibition at the National Arboretum Canberra had its own story. Every time I was moved by the overwhelming moment of Now and wanted to capture and share that experience with the audience. I welcome personal commissions – contact me via helpdesk@artloversaustralia.com.au

Art for Sale by Valentyna Crane