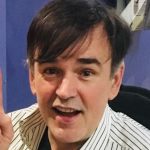 Tim Ferguson is a comedian, director, screenwriter and artist.
For over 30 years, his impressionist artworks have been popular worldwide.
Tim is a member of the international comedy trio Doug Anthony All-Stars [DAAS].
He has written, directed or starred in stand-up comedy, TV, movies and sitcoms.
He also teaches comedy screenwriting internationally.

Art for Sale by Tim Ferguson