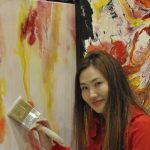 Sung Lee is a Sydney based contemporary painter, sculptor and mixed media artist.

Sung Lee is a Sydney, Australia based contemporary painter, sculptor and mixed media artist. She has studied art throughout her life and has graduated from the University of Sydney (Visual Arts). Initially, she began painting portraiture to establish her cultural identity. From there her work gradually developed to more abstract forms. She has expanded her artistic focus to the observation and appreciation of the natural world. As she travelled extensively, she became more aware of her surroundings and began to love nature and notice intricate details, which she translates into her art practice.

Sung has been awarded several times and was the recipient of a Merit Award in the Moreton Bay Art Prize, Brisbane Australia. She has exhibited her artwork in several group exhibitions including the “Fifth Perspective” in Fortitude Valley. She has also showcased her solo exhibition “Lost Identity” in Brisbane.

Sung’s various abstract artworks have been purchased for display in specialist and dental waiting rooms and also for private offices and residences within Sydney, Brisbane and Melbourne. Her artwork has also been collected by several public sectors such as the Brisbane North Institute of Technical and Further Education (TAFE) and the Brisbane and Southbank Institutes of Technology.

Art for Sale by Sung Lee