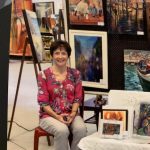 Sue delights in being creative in her studio for a few hours most days. She works mostly in acrylics and oils but likes to try her hand in a variety of mediums such as wax and collage etc.

Sue’s paintings are based in reality but she likes to look for the humour in everyday life.

Sue was brought up in Central Africa and spent her formative years moving from one small mining town to another with her family. Both parents were creative and her mother was a botanical artist. Sue was encouraged to amuse herself with few material possessions. She developed a deep love of nature and the surrounding bush with its diversity of flora and fauna.

Many years later Sue emigrated to Perth with her young family and as soon as her children were established at primary school, she began to attend part time art classes.

A decade later, she became a volunteer art guide at the South Australia Art Gallery, which reinforced her love of history and art.

In the past decade, and following a further move to Brisbane, Sue has persued her own art career.

Art for Sale by Sue Hill