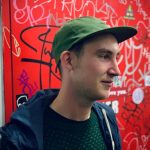 Multi-disciplinary artist working across the fields of painting, muralism and graphic design.
My compositions are transferred energetically from the street to the studio.

Simon Beuve is a French/Australian artist originally from Normandy. In the year 2000, he discovered graffiti and moved to Paris, to be part of the main scene in France. He now lives and works in Melbourne, creating murals and paintings. Simon’s work has evolved from the street onto the canvas with a gestural and abstract aesthetic, exploring the essence of the city and its impact on society. His work is inspired by all the little details and layers our day-to-day environment has to offer which are often overlooked as mistakes. This for him is the essence of emotion and energy. These ephemeral unintentional marks of life are captured and translated to paintings, collages, and assemblage.

Simon’s work has been presented at several solo and group shows, publications, and street art festivals worldwide. He exhibited his first solo show in Melbourne in 2015. Recently he has dedicated the majority of his time to studio work, honing his aesthetic and exploring the conceptual basis of his practice.

Art for Sale by Simon Beuve