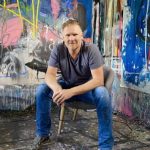 Shane Bowden is a Neo Expressionist painter, artist and printmaker.  He is well known around the globe for his vibrant, colourful pop art silkscreen works reminiscent of Andy Warhol and Robert Rauschenberg, particularly in Japan. A mercurial figure, he eludes public apprehension & definitions by constantly shifting styles & adhering to his own intuitive program of freedom & novelty of execution & themes.

Lives and Works in Sydney – Australia and Camogli Italy

Residing in the USA and Japan from 2001 to 2019, he is well known around the globe for his vibrant, colorful pop art silkscreen works reminiscent of Andy Warhol and Robert Rauschenberg.

Synoptic flashing juxtapositions of silk screened imagery nostalgically recall the visual stratagems of the sixties; the collage techniques & unexpected material contrasts here & there, deliberately untidy contours & lavish paint smears meters long in these new combinations remind us that his works continue to bridge the gap between action painting & Pop Art as well as the seminal gap between art & life which he has so compellingly carved out for himself.

In 2019, he returned to Sydney Australia and continues to work with a new, inspired and passionate drive towards his work.

His current oevre of work is deeper and best characterised as Pop- straction meets Neo Expressionism. Themes revolve around his love of travel, the culture and color of the places he explores and the people he meets. Layered pallettes of color give way to loose charcoal and graphite figurative or written ideas, that are then heavily defined with oil stick and paint to contrast and give the paintings a sometime lurid yet harmonious feeling.

A mercurial figure, he eludes public apprehension & definitions by constantly shifting styles and adhering to his own intuitive program of freedom and love of the visual art practice.

His work has been used on countless Film Sets. Highlights include ‘Sex and the City’, ‘The Carrie Diaries’, ‘John Wick 2’, ‘The Big Bang Theory’, ‘Curb your Enthusiam’, ‘Get him to the Greek’, ‘Forgetting Sarah Marshall’ and ‘This is 40’. His work has also been featured on Television programs. From the wild and crazy game show ‘Takeshi’s Castle’  in Japan, to ‘ Keeping up the Kardashians’, and home design shows, ‘ The Block’, ‘ Million Dollar Decorators’ and ‘Selling Sunset’.

Art for Sale by Shane Bowden