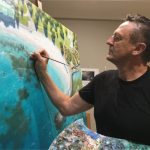 Paul Lucas creates his large pieces with oils and his current muse is the ocean, particularly the areas surrounding the Abrolhos Islands, off the Western Australian Coast.

Paul Lucas was born in Derbyshire, England in 1955 and moved to Australia with his family in 1963.

Inspired by the vivid Australian landscape and artists of the Romantic Movement, such as Turner and Constable, Paul Lucas devoted himself to nurturing and realising his talent for rich and dramatic depictions of local landmarks. His unique vision and subtle interpretations have won many admirers.

Paul Lucas’ current muse is the ocean, particularly the areas surrounding the Abrolhos Islands, a ‘subject’ he became fascinated with after working for many years on cray boats. His love of and respect for the ocean is evident in his work and his latest canvases capture in spectacular detail and colour the ephemeral moods and subtleties of the water and horizon, combining superb detail with an extraordinary use of colour and light. Paul Lucas has a gift for truthfully observing environments whilst elevating mundane details; in his vision the utilitarian becomes sublime.

Paul Lucas has exhibited in South Africa, Rhodesia, Canberra, Alice Springs and throughout WA. He now resides in Perth, WA with his wife and their three adult sons and families. Paul Lucas has had the privilege of working solely as an artist for the past ten years.

Art for Sale by Paul Lucas