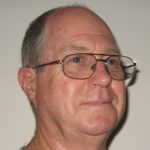 I paint with Acrylics and Oils in a realistic style, landscapes, seascapes, Still life, Portraits and nature are all included in my work as I prefer variety as it fires up my passion for each new painting.

In my mid teens a twelve month course of Commercial Art at Darlinghurst, Sydney was followed by a five year apprenticeship in Signwriting, mural painting and general display where I learned to master the trade of hand painted signwork and murals. Working under a master craftsman the why’s and how’s were drummed into me before finishing the apprenticeship in the early 1960’s. After five years I started my own Sign Company and for the next twenty something years contracted work for many large firms, including nine years painting and signwriting advertising on eighty plus buses per year (pre vinyl). In 1990 I moved my family to Queensland and worked as the in-house Scenic Artist/Signwriter for Warner Bros. Movie World on the Gold Coast for fourteen years until my retirement. After a few years and painting a few family portraits my passion for painting was renewed and I began painting exclusively with Acrylics. Soon Oils crept back and I was shortly in full swing a continuous string of works. In 2011 I joined the Royal Queensland Art Society (Gold Coast Branch) and have won many awards and sold paintings since. I now have my work in most Australian States, U.S. and France and have completed commissions here in Australia. I paint in a realistic style using photo references as I find that is the best way to achieve the correct colours and perspective. I paint all genres such as nature, seascapes, landscapes, still life and portraits.

Art for Sale by Paul Bennett