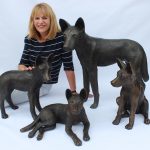 Mela is a Brisbane sculptor working in bronze.

Her work can be found in Europe, U.S, Asia, N.Z and Australia.

Originally a physiotherapist, Mela sculpted part time for many years. When she sold her physio practice around ten years ago she became a full time sculptor . The physiotherapy gave her a great understanding of both the human form and working in three dimensions.

Mela Cooke’s work is entirely figurative, sculpting both people and animals, as well as occasional objects.

She has completed eighteen large bronzes which are in the streets of Maryborough (Qld) and is progressively sculpting two series, one of sportspeople and the other of Australian endangered animals. Apart from her outdoor work, Mela sculpts mainly smaller indoor bronzes which are suitable for interior spaces in homes.

Mela works  in clay which is then moulded and cast in bronze;  allowing great definition and subtlety of line.

The aim is always to capture the character and soul of her subject.

“I love both the process and timelessness of bronze, and I always hope that the viewer will gain the same degree of pleasure that I do from my sculptures.”