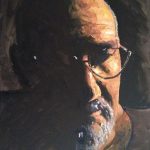 “For me fine art, like music, should not only stimulate the mind but also the emotions. Capturing that special, almost indefinable quality of light can elevate a work of art to a level which commands attention and reverberates with the senses by virtue of its sheer beauty.
Thus, by convincingly evoking the atmosphere created by the play of light on a subject painted, I seek to involve the viewer emotionally with it. It is this, I believe, which surpasses the devices and techniques used in the creation of my art.”

“In these times when there seems to be so little regard for the value of craftsmanship in fine art, it is truly gratifying to discover artists who strive to develop the knowledge and masterly skills that were once the hallmark of the great artists in the past.” — Marc Poisson

Marc Poisson sells artworks from Britain, Ireland, Canada, USA to Australia and South Africa. Enjoying the mature period of his profession, he is quite at ease in his bold, distinctive style of painting.

He consistently captures atmospheric light in scenes of typically Australian and South African subjects which hark back to a more peaceful, leisurely era. This view seems to be substantiated by his aversion to many of the things we associate with modern life. For example, one seldom sees a motor vehicle in his street scenes and sometimes even bitumen roads give way to the old gravel farm roads.
Many of his subjects underscore the historical significance of resonate scenes. Scenes such as the Sydney Harbour Bridge or world famous Sydney Beaches. Consistent subjects are the horse riders of the Snowy Mountains and Fraser Island along with a variety of striking rural scenes.
In South Africa he is well known for his Cape Dutch Homestead paintings and Cape Harbour scenes. Figure studies also dominate.

Examining these various subjects, one perceives the way this artist uses light to underscore the importance of scenes as if to etch them into our national psyche, as though they need to be cherished and preserved for future generations. His scenes with horses seem full of life emphasising the nature of an appealing rural countryside.

Marc has been inspired by a number of his peers over the years. However, the greatest influence came from three artists who in the 1970’s were considered the best known realists in South Africa. These artists were Dino Paravano (in America), Titto Fasciotti and Errol Boyley. He feels that much can be learned from the strength of Fasciotti’s colours, the warm tones of orange and yellows also reflected in his greys; Paravano’s mastery over light and shade, his skilled use of contrasts which can be observed at dusk and dawn as light illuminates common scenes giving them a sense of space and movement; and Boyley’s mastery over superlatively rendered sky-dominated landscapes. Having progressively developed his style and technique over the decades, Poisson’s work is distinctly and immediately recognisable.

TECHNIQUE
From close observation of his work he obviously enjoys thick paint on canvas, and the textures which result from use of the palette knife. Often there is evidence of scumbling with the knife combined with bold impasto brush work. When timber boards are occasionally used as a support interesting textures are achieved in the priming stage enhancing the end result.
While his colours are not garish, they are often quite strong and striking, particularly when depicting passages of light and shade or in some of his dramatic sky scenes. Harmony of colour is what is strived for. He has a strong aversion to the fashionable gaudy colours often used for no good reason in contemporary work today.
He conscientiously employs methods that ensure the longevity of his artworks.

OVERSEAS STUDIES
Galleries where he has studied the works of the Old Masters include the National Gallery in London, Van Riyn and Van Gogh Galleries in Amsterdam, The Louvre in Paris as well as the Prado Art Gallery in Madrid where the Spanish artists Deigo Velasquez and Sorrollo greatly impressed him. Marc Poisson finds his work in ever increasing demand as he divides his time between South Africa and Australia.

Private collections where his artworks are enjoyed include not only Australia and South Africa but other countries such as Israel, Portugal, Austria, United Kingdom, Republic of Ireland, Canada, United States of America, Japan.
In the prime of his artistic career, Marc Poisson studies and travels, constantly seeking to fuel the inspiration needed to create images that strike a chord within our inner selves.

Art for Sale by Marc Poisson