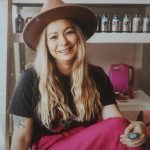 Self taught artist Heylie is the small creative force behind brand Vixen Designs. Native Australia flora & fauna are her main painting inspirations with the Black cockatoo being key to most of her pieces!

Self taught artist Heylie is the small creative force behind brand Vixen Designs. Starting out as a watercolour artist she quickly merged into becoming an Acrylic artist & has been producing small to large works over the past 4 years. Australian Black Cockatoos & wildlife are the key images in Heylie’s artworks which have helped her sell works all over Australia & internationally. She featured in Stolen Publications, completed a RAW Arts Melbourne Exhibition in 2016 and soon to be released collaboration Vixen Designs X CottonOn Tee series for the T Bar Express yourself range hitting stores worldwide September 2016.

Art for Sale by Heylie Morris