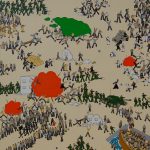 Guy studied at Chelsea College of Art in London, before continuing his studies at Lasalle-SIA College of the Arts in Singapore. In 1999 he earned a BA in Fine Art with Distinction (majoring in painting), conferred by the Royal Melbourne Institute of Technology. After graduation Guy moved to Sydney and continued his painting practice. He has exhibited and sold his work through Breathing Colours Gallery in Balmain, Sydney. Media coverage has included articles by the Sydney Morning Herald in 2009 and 2012. Guy’s current work explores various socio political themes including war, religion, and human folly.

Art for Sale by GUY PORTER