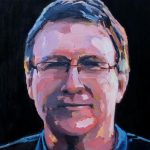 Born in country Queensland and have participated in group and solo shows in
Brisbane, Sydney, Melbourne, Adelaide, New York and Paris. Works are held in private,
public and corporate art collections in Australia and overseas, including Perpetual Trustees,
Sydney; a large canvas titled ‘Christmas Eve’, now held in a private collection in Melbourne,
formerly hung at the Crown Casino.

On leaving art college, worked for many years as a graphic artist in the printing industry. A supporter of and did volunteer illustration and graphic art work for the Antarctic Protection Society.

First Australian solo exhibition was at Soho Galleries, Sydney in 1996 and exhibited there on a regular basis over the following years.

A finalist in the Glover Prize in 2012, one of Australia’s most significant awards for
landscape painting. A semi-finalist in the 2013 and 2015 Doug Moran National Portrait
Prizes.

Now paints in solitude at his Gympie studio, preferring to work in oils on Belgian linen. In recent years his interest has gradually shifted from the landscape to the female nude and
portraiture.

Artist Statement
My art is inspired first and foremost by what I see, feel and experience. I explore the female form, painting in a style that is free and intuitive. Backgrounds are only important as blank backdrops, allowing the focus of attention to remain fixed on the nude. Colour is used to embellish, in the sense of adding to the aesthetic or emotional density of the composition.

Art for Sale by Glenn Miller