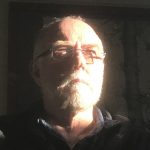 Ask Geoff to paint your yacht.

He left his idyllic life in a small fishing village on NSW north coast at 16 to start an apprenticeship in Sydney.

At age 60 he was made redundant and found that it was difficult to find work.

After experimenting with fused and slumped glass, he found a class making linocut printmaking.

He began experimenting with reduction prints, however a back injury made bending to carve the plates difficult, so he picked up a paint brush and tried painting.

Late 2017 he began painting with acrylics, and then approx. 2 years later he started painting in oils.

He displays work every year at Sydney’s Royal Easter show, and occasionally exhibits.

He takes inspiration from nature, and his many years surfing and sailing.

His works often contain some relationship to water.

Art for Sale by Geoff Hargraves