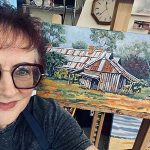 Gayle Reichelt is an Australian Artist who is passionate about colour and texture.  Born in Yarram in South Gippsland, Victoria, and having lived in various places in Victoria, NSW, and Queensland, Gayle is now living and working in the Gold Coast.

Inspiration: Gayle’s inspiration is her love of the Australian country, especially farms and farm buildings, farm machinery and animals, old and abandoned buildings and homesteads. Gayle grew up in the country in Gippsland, Victoria and began painting when living in Deniliqiuin, NSW, 40+ years ago. Gayle began her paintings and drawings en plein air, then completed them in her studio. These days, because of safety, she makes regular photography trips in country areas and takes many photos of subject that she loves. Upon returning home, she then paints from her own photos in her studio in the Gold Coast. Gayle’s method of painting is to paint in layers, and her realist paintings take at least four or five days to paint.

Art Education: Gayle’s artwork has progressed through many stages of her art career. Always a drawer since childhood, she began her painting career around 1979 whilst living in Deniliquin in NSW, learning skills by attending workshops by various professional artists and applying what she had learnt in her studio. During this time, Gayle won many art awards, and her artwork in featured in Corporate Collections and overseas.
In 1992, Gayle attended LaTrobe University Bendigo as a mature age student and obtained a BA Hons (Fine Art), and a Graduate Diploma of Education (Secondary). University broadened her outlook considerably and encouraged her to be more experimental in her approach. Gayle has experimented in Realist, Surreal, and Abstract Art and has used multiple mediums, including Resin and Encaustic. She now works mainly in oil, watercolour and charcoal drawings.

Current Art Direction: Having survived cancer in August2019, Gayle now produces artworks mainly in Oil, Watercolour and Charcoal Drawings. Prior to being diagnosed with cancer, Gayle ran regular workshops in Encaustic, Resin and Acrylic Pour, and many Resin works are still available for purchase. Now, in remission, Gayle has chosen not to teach, but to concentrate on her first love, which is realistic Australian Landscapes and Homesteads. Gayle also enjoys portraiture.
In February/March 2016, Gayle was featured in a solo exhibition in the Arts Centre, Gold Coast City Gallery (now HOTA), called “The Last Fleet” which focused on weathered shipwrecks.

Art for Sale by Gayle Reichelt