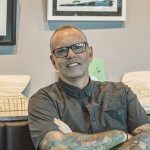 I grew up in Sydney’s eastern suburbs surround by the ocean. My family home was in La Perouse, an area rich in Australian history for both the First Australian Aboriginal community and early western explorers, which exposed me to an interesting mix of artistic expression from an early age.

When I moved to the Gold Coast in the late 90s, my passion for surfing was sparked and this found its way into my art.

Defining style is a subjective art so it is no surprise that my style has been variously described as a mix of pop art, contemporary art and cubism.

The evolution of my art continues, no doubt influenced by the people I have met through my work and social experiences.

I grew up in Sydney’s eastern suburbs at a time when its affluence was yet to dawn. My family home was in La Perouse, an area rich in Australian history for both the First Australian Aboriginal community and early western explorers.

It was from here that I was schooled and gifted the love of art.

I later travelled to the city’s centre to work as a graphic designer and, after hours, to play guitar in a mildly-successful heavy metal band.

Around the turn of the century I sought a change of pace and moved to the then fledgling regional town of the Gold Coast in Queensland.

While I had grown up around the ocean it was on the Gold Coast where my passion for surfing would be sparked and its influence in my art would be ignited.

As an artist I am continually inspired by the curves and flow of the ocean and its ultimate interaction with the harsh coastline and its surrounding man-made architecture.

My observations are then applied to various substrates including timber and canvas using acrylics, spray paint, fibreglass, resin and pen, while my love of 35mm film and processing via cyanotype creates some unique photo prints.

I now work from a studio contained within a surf business on the Gold Coast, ensuring both my professional and private life remain centred on the ocean.

Art for Sale by Ez Larmor