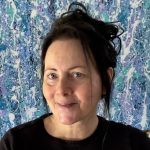 An interplay between chance and something more considered occurs within my paintings and I never fully know where the work will take me. I seek the solitude of my home studio to dive deep into a zone of subconscious thought that results in expressive and emotive abstract pieces.

My intention is to evoke an energy or strength within the work that captures the link between process and inspiration.

Donna relies on instinct as she lays down expressive marks in a multitude of layers that either work as the resolved piece or as a backdrop for something more figurative.
Nothing has been predetermined in her abstract expressionist pieces as her subconscious takes over and her intuition kicks in.

Donna completed a Bachelor of Fine Art, at the University of Newcastle in 2008. She has had several solo exhibitions and has been involved in numerous group exhibitions both, nationally and internationally. Highlights include having exhibited in London for the first time in 2018 and the City Recital Hall, Sydney in 2020.

A two- time finalist in the Gosford Art Prize with her work shortlisted by judge, Brian Stratton in 2019, she won first prize for the Non – Indigenous category in the Reconciliation Art Awards in 2010, held at the Gosford Regional Gallery and has been a two-time finalist in the Lethbridge Art Prize online in Queensland, as well as gaining numerous accolades and recognition over her seventeen year art practice.

Community projects include, Art for Epilepsy, Art Out of the Box – Take 3, and fundraising at her very first solo exhibition in 2009 for Coast Shelter, Central Coast. She was also a community representative of the Gosford Regional Gallery, 2013-2016 and has had artist profile features in several issues of Art/Edit Magazine, been featured in the Central Coast Express Advocate and will be featured in an upcoming book being printed in 2020, Artists of the Central Coast – In Their Own Words.

Donna’s work is hanging in private collections within Australia, and the United Kingdom.