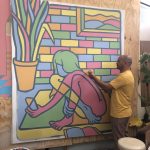 Dion is a Gold Coast based multidisciplinary artist.
Known for his humorous, innocent yet cheeky and beautiful works predominantly featuring his signature character, “Lil Dusty.”
Dion has exhibited in group and solo shows around Queensland and interstate.
His work resides in public and private collections around Australia and also overseas.
In 2018 Dion won the swell Sculpture major award for his collaboration with Andrew Cullen titled “Prickles the Unhuggable Bear.” A four metre tall teddy bear made from recycled barbed wire and reo bar. Now residing at M-Arts Precinct in murwillumbah.
For the last five years dion has created the sculptural trophies and posters for the Gold Coast Music Awards, with winners including Amy Shark, Karl S Williams, and Saint Lane.

Art for Sale by Dion Parker