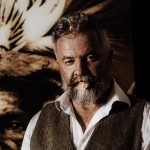 Davids work focuses on the disappearing indigenous culture in the South Pacific.

David Kirkland is the most widely published tourism photographer in the South Pacific region. Commissions have also taken him to the Middle East and the African Continent.

He specialises in capturing memorable photographs for tourism authorities and producing world-class images for resorts and cruise operators.

His primary focus is on delivering photographs that stand out in a competitive international market place.

David became a professional tourism photographer in 2000 after more than a decade of managing tourism authorities in Australia. His earlier background was journalism, public relations and marketing.

His photographs circulate the globe and he has written and photographed 16 books. David is also a frequent contributor of articles and photographs to travel publications and newspapers around the world.

Davids work takes him away for up to eight months of the year. Otherwise he is based in Brisbane Australia where finding the time to complete the renovations of his home continues to elude him.

Art for Sale by David Kirkland