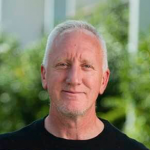 Born in Hertfordshire England, in the middle of the ‘swinging 60’s’; my early influencers were The Beatles, The Rolling Stones and The Who.

​In the 70’s colour TV arrived, bringing with it the likes of Wonder Women, Star Trek and Bewitched. The highlight however, was The Wonderful world of Disney, which introduced me to the world of fantasy and imagination.

​Fortunately I don’t think I ever recovered. Art and colour had become a part of my life forever.

​My first full time endeavour was working as a Chef in and around Mayfair, London in the 80’s. It was the height of Nouvelle Cuisine which revolutionised the way food was prepared and presented. Now it was a bona fide art form and right on my wavelength.

​After much success and years later a move to Australia brought with it a sea change and a new creative outlet in the form of painting. Still using lots of colour and still trying to bring something new and inspiring.

​I really hope that you enjoy my work, after all it is you that I painted it for.