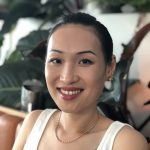 Coco Shi is a Chinese born Australian Artist. She uses Oil paint as her medium and paints in Realism style. Her works intend to connect with people emotionally by capturing meaningful moments; such as the colour of a breathtaking sunset, the feelings of holding a love one’s hand and the dramatic of a rising storm cloud. She wishes her painting connects with her audiences, and for them to have this special piece to enjoy.

I begin to practice art since I was a child. When I was in China, art wasn’t a compulsory class, I remember choosing to go to Chinese Calligraphy and painting classes after school, and later I joined the drawing class on the weekend.  During that time, I’ve learned composition and shading contrast, which later became a important part of my practice.

​When I came to Australia in 2003, I’ve discovered that there were more freedom of Art making in Australia compare to in China; you can experiment, express what you desire and there aren’t many restrictions to limit your doing. When I was in high school, we were given a task to paint our interpretation of the word “Sublime”. Many students drew, painted and sculpted religion themed subject matters. However, my impression of sublime was in nature, I painted a detailed moon on a large canvas, and positioned a Gothic castle to contrast the scale of the moon. That was my very first completed artwork, and from there on, I fell in love with painting.

After high school, I’ve decided to pursue this passion: I enrolled into a Diploma degree of Fine Art/ Visual Art at Tafe. During that time, I’ve learned Sculpture, Digital Media and Oil Painting. Along with the support and encouragement from the teachers, I had my first exhibition there. I applied and got accepted at the University of Queensland, to study Fine Art, major in Visual Art. Three years when by fast, I’ve graduated my university degree and decided to become an Artist who specialize in Oil Painting.

​In 2016, thanks to the support of my wonderful husband, I started Coco Shi Art; I sell original painting online through online art galleries and my website, I do commission works by request and give visual art advice to client who have inquiries regarding commission works.