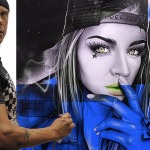 Christian Chapman is an established painter based in Australia and has hundreds of collectors worldwide. Please browse through Christian’s stunning range of artworks. Commissions are also welcome.

Christian began drawing at a very young age and subconsciously absorbed his skills from watching his mother painting.

He was an established New Zealand Artist with exceptional portrait skills drawing from life and beautiful nature studies. He was also a Fashion Illustrator and Art tutor and won numerous national art awards.

Christian grew up in New Zealand overlooking Sumner beach in Christchurch and naturally began to paint the sea. Living up on Clifton Hill with the Southern Alps framing the sea he also began his addiction to the ocean and surfing. There was no drive on access to the property therefore just the sea and the trees with no cars or neighbours created the perfect environment to paint and also play music and guitar another interest of his.

Christian at 16 years of age began training his art skills on the diverse medium of surfboards at Ian Thompsons Exit Surf shop.By the time Christian was in his early twenties he decided to venture the alluring horizon and moved to the Gold Coast, Australia. With a bigger audience and faster-paced lifestyle he began to develop his portrait art skills at his Gold Coast art studio.

Christian mainly uses hand paintbrush with some airbrush as an added unorthodox element to his paintings. Now, this unique look has attracted art collectors from all over the world wanting to own an original one of a kind Christian Chapman Art piece.

Christian’s passion for the ocean and music are evident through his ocean and portrait series artworks. He believes in recreating these visions and painting them to inspire his audience and to compliment any room or décor.

He has also launched Christian Chapman Art Surfboards morphing both his artistic and shaping skills together to produce beautiful vintage-inspired surfboards that are completely unique and one of a kind.

There are no rules in the world of Art and Christian will continue to bring his boundless free expressionism to change the status quo and inspire you the viewer’s perception.

Ask me about Commissions