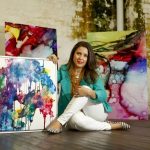 I love to get lost in the flux and flow of the artmaking process and am drawn in by the unpredictable nature and organic movement of working with inks and fluid painting.

Celeste Wrona is an award winning Australian contemporary artist with over a decade of experience making and teaching visual arts. Her vibrant collection celebrates free-flowing form, texture, and colour, resulting in visually stunning pieces that are cementing themselves in today’s contemporary art scene. Celeste’s original works and limited edition prints are held in private collections worldwide and have been exhibited nationally and internationally.
Celeste’s work has recently featured on Channel 9’s The Block; in 2018 and in the 2016 series. Celeste’s works have also appeared on Channel 7’s House Rules in 2017, on Channel 9’s Postcards in 2018 and can be currently seen on the set of Channel 7’s House of Wellness. Celeste and her work have also been featured in a variety of well-known publications, both in print and online including Vogue Living, Inside Out Magazine, Art Almanac, The Age and Stellar Magazine with Neale Whitaker listing Celeste’s artwork Awaken III as one of his Objects of Desire.

“My studio practice embraces a dynamic and fluid art-making process. I combine methods and materials that juxtapose both a chaotic and intuitive process. I view my work as being multidimensional, something that resonates physically and emotionally with the audience. Being able to transform a phyiscal space into a mindful sanctuary that facilitates a deeper level of personal awareness, taking the viewer to another place. My goal is to invite the viewer to actively construct meaning that encourages them to consider, react, and respond on my work and their internal state simultaneously” Celeste Wrona

Celeste was recently commissioned by the Ingham Institute of Medical Research in Sydney to create three artworks based on cancer cells as seen under the Merlin Microscope. Celeste was interviewed by Channel 7’s Natalie Barr on the process and concept behind these works. Celeste has explored the influence of science within her artmaking further though her artist residencies in 2017 at Monash University’s Australian Regenerative Medicine Institute, Melbourne.

Celeste was born, in 1983 in Sydney Australia. As a child, she demonstrated a natural artistic ability and her passion and love for art throughout her adolescence lead her to pursue art professionally. Celeste successfully gained entry to the prestigious University of New South Wales, College of Fine Arts (COFA) in 2001. It was here that she further developed and refined her innate artistic skills as well as completed a Bachelor of Art Education degree.

In 2005, Celeste gained full tenure with the NSW Department of Education to teach Secondary Visual Arts. Celeste has taught many students that have also established themselves as successful artists. She finds great joy in moulding and watching students grow both intellectually and creatively each day.
After originally starting out as a traditional European-styled pencil artist, Celeste’s artmaking organically evolved in style and media, however, regardless of her material practice, she was always drawn back to the raw beauty and complexity of nature. Her paintings and mixed media works are indicative of a more sophisticated re-invigoration of style, colour, texture and form.
Celeste loves to get lost in the flux and flow of the artmaking process and is drawn in by the unpredictable nature and organic movement of working with inks and fluid painting. She invites the viewer to lose themselves within the picture and at the same time, the pictures themselves stare back and hold the viewer’s reflective attention.