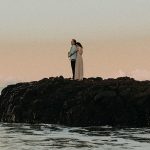 Stephen Blanch and Bonnie Sevil are both experienced professional photographers who work as a collaborative team in producing ethereal photographic art images.

The series of work ‘Edge’ involves using vintage Polaroid cameras and expired Polaroid films where the uncontrollable effects of the film add to the allure of the work.
The series ‘Edge’ is divided into two different techniques, ‘Obscura’ and ‘Fade to Black’ both investigate notions of anxiety, fear and fragility.

Obscura includes a series of images that were created on the beaches and coastline of the Northern Rivers, NSW. The imagery was created using a hand assembled, cardboard, Pinhole Polaroid camera and 669 peel-apart Polaroid film. The Polaroids were made using varied exposure times, between 2 seconds to 5 minutes, depending on the available light at the time. The combination of the long exposure times and the qualities of the film enabled the images to have beautiful saturated colours and dream-like ethereal qualities.

Fade to Black was also created on the beaches and coastline of the Northern Rivers, NSW. The photographs were taken with a vintage Polaroid SX-70 and used one of the last integral films manufactured by Polaroid (Fade to Black). The experimental film once exposed will drift through different phases of colours ranging from light bluish greens through to darker reddish browns, slowly collecting more unique textures and streaks before it turns to complete blackness. This process will be completed within a 24 hour time frame, the only way to stop the process is to peel the film apart and let the chemicals dry before the image reaches complete darkness.

The process of the film can seem confronting; to have an image completely lost forever, a visual secret. What may sound scary and destructive is in fact a beautiful materialization of some of Polaroids unique characteristics: unpredictable results, unique independent picture development and the nostalgic component of chemical darkening over time.

In the series “Edge” we were interested in exploring moments of isolation and dislocation, stillness and silence, anxiety and insecurity; and ultimately reflecting on the beauty and purity of being in such a fragile state. Our intentions were to suggest meaning rather than prescribe, exploring the ambivalent nature of identity. The imagery often depicts a moment of suspended drama ‘a girl sitting on the edge of a cliff, the water below”, you are unaware how she got there, what she is doing there, and what may happen next.

Within Edge, the photographs only depict one girl, almost always nude. Our intention was to obscure any labels an audience could place on her. If she were clothed, she would be tied down to a specific time and place in history, and stigmatized with different cultural connections. We wanted the figure to be left anonymous, associated with no one and nothing; creating a great sense of desolation, disconnection and fragility.

This series of work uses a variety of cameras, films, and techniques including multiple Polaroid cameras and expired films, medium format cameras, digital cameras and scanners. The series was photographed around the Evans Head NSW coastline. We were intrigued to see how different an environment would look at different times of the day or week with the tidal or weather changes and how this would translate in the photos.

During this time we became aware that we were in a transient space, the tidal zone, or edge of the coast, which was sometimes under water and sometimes exposed. This is also the literal interpretation of Edge; the space where the photos were taken on the edge, the wave impact zone, the Littoral Zone.

Hence the title of the installation became ”Edge”, which also allude to the metaphor of the human condition, being pushed to mental and emotional limits, a person on the edge. The figure depicted is in a dangerous and fragile state and position, what happens next decides the future, does the figure surrender to the pressure and step off, or recognize the adrenaline fuelled state of danger, find strength and resilience and step back and move on?

“More than fragility, vulnerability and fear. An awakening realisation of the thrilling beauty of being in that adrenalin fuelled state. Those intense, traumatic and very much paralysing moments where uncontrollable emotions can take hold.”