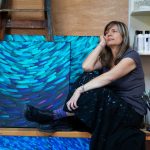 Välimäki’s underwater series depicts abstracted underwater scenes where schools of fish swim and swirl in harmony. The impressionist application of a single colour per brush-stroke, each representing a fish, works to create a varied depth of field and an almost three-dimensional appearance. In vibrant blues and greens with pops of red, yellow or magenta, her paintings appear alive with movement, texture and colour. This series of works talks about Välimäki’s connection and love towards nature, especially the ocean. The work depicts abstracted underwater scenes and is full of movement, texture and an array of ocean colours. The titles of the paintings reveal the inspiration behind the paintings, schools of fish swirling around. Recently, Välimäki realised that she is using the same colours in her paintings as the Finnish traditional textile artists weaving the landscape of Finland. Välimäki loves exploring and experimenting with the mediums she chooses to achieve a visual feast in the viewer’s eye.

Finnish born Australian based impressionist artist. Practicing since the mid-1990s, Arja has completed her BFA and MFA at the University of NSW, Sydney. She has exhibited widely in both Australia and Finland, including twenty-one solo exhibitions. She has been a finalist in the prestigious Wynne Prize at the Art Gallery of NSW; Sculpture by the Sea, Sydney; Fisher’s Ghost Art Award, Campbelltown Arts Centre and the Sydney Living Museums Meroogal Women’s Art Prize. Arja has won numerous awards and grants, including a scholarship to study her MFA. Arja was also named 2004 Young Kalevala Artist of the Year, Finland. Arja Välimäki’s works are held in public and private collections in Australia, USA, Canada, UK, Hong Kong, Singapore, Germany, Sweden, Spain and Finland.