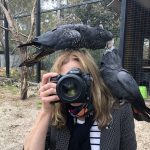 Angela Robertson-Buchanan is “The Bird Photographer”, an award-winning professional nature photographer and published children’s author, specialising in birds. Originally from the UK, Angela is now based in Sydney, Australia, is a passionate conservationist and bird advocate as well as a wildlife carer specialising in parrots.
Angela combines her interests in wildlife and photography by creating images, projects and exhibitions where she can convey a conservation message.
Some of Angela’s awards include Australian Geographic Nature Photographer of the Year. Angela has held numerous solo exhibitions as well as now curating BirdLife Australia Bird Week where the aim is to raise bird awareness and much needed money towards research and conservation.
All sales go directly to Angela’s wildlife rescue care as well as a percentage of sales donated to wildlife organisations Angela supports.

Art for Sale by Angela Robertson-Buchanan